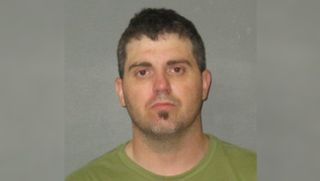 BATON ROUGE - A man admitted to a state trooper that he took "about $40 worth" of heroin after a sheriff's deputy found him slumped behind the wheel of his vehicle in the middle of Airline Highway.

Law enforcement found Daniel Varnado, 34, asleep in his car at the intersection of Airline and Jefferson Highway. A sheriff's deputy asked him what he was doing, and Varnado said he was "going home," according to arrest documents.

When told to move his vehicle, Varnado passed through the intersection and began driving the wrong way down Airline Highway before officers stopped him again.

A trooper asked Varnado if he had been drinking, and Varnado said he had two beers hours earlier. However, he later admitted to using heroin, which he allegedly just bought at a nearby hotel, after he was asked repeatedly about possibly taking drugs.

Police also noted recent damage to the front of Varnado's vehicle, which he said may have come from hitting a gas pump. Troopers later determined the damage came from a hit-and-run crash where Varnado apparently rear-ended another driver just moments before he was found unconscious in his car.

Varnado was booked for hit and run, operating a vehicle while intoxicated (second offense), and other traffic-related charges.