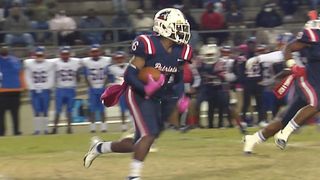 BATON ROUGE - Defensive back Keelan Reason is Liberty's Swiss army knife, making plays everywhere on the field. Last Friday night, he had three interceptions—two of them returned for touchdowns—and even threw for a score on offense.

"Baller energy, always talking, great personality, fun to be around, fun to coach. He's just a guy that has a lot of energy. You love to see that from a DB," Liberty Head Coach Drey Trosclair said. "He kind of runs the secondary and runs the back end of the defense. Keelan loves the game. He just loves playing. He loves being out here competing."

"I think of myself as an athlete. I'm not just a defensive back you know. Coach could put me in anywhere and I will do my best," Keelan said.

His motor comes from not only his love and passion for the game of football but from his mom, Kimberly.

"My mom is a dog in everything she does. Paying bills, she had to do everything on her own. And that's who I really look up to. She has a dog mentality all of her life and that's where I get it from," Keelan said.

That makes three Liberty football players who have won the Fans' Choice Player of the Week. Two of them were on the defensive side of the ball.

The Patriots are a very confident football team heading into the postseason after winning their district in their first-ever varsity season with a record of 8-1.