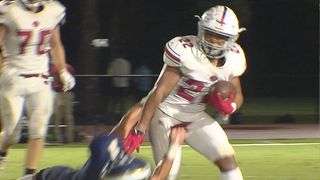 Kalante Wilson is a workhorse. The back would rather run through defenders than around them, which is why his running style has been compared to former NFL star Marshawn Lynch.

"We don't throw Skittles at him, but he certainly goes beast mode at times. I think he takes pride of how hard he works in the weight room. And it's not just for show. You know that the muscles he's got, they're functional. He's got that mindset that he can't be tackled, and I've rarely ever seen the first man ever bring Kalante down," Dunham head coach Neil Weiner said.

"Just keep carrying the ball, just keep running down people's throat. I have the mindset that I am going to run people over, and I am going to make one cut and go," Kalante said.

"Somebody smart that talked about humility... and that it's not that you think less of yourself, you just think of yourself less. I think Kalante just really does exemplify that. He doesn't talk about himself. He's gonna bring the best that he can every single time, and he doesn't have to talk about. He doesn't have to beat his chest. He just loves getting the job done and helping his teammates go," Weiner said.

Kalante is no stranger to this award, as he won it earlier this year. And he's such a polished pro that he made sure to give credit to his offensive line for not only helping him win Fans' Choice but also to help him break Denham's rushing record.