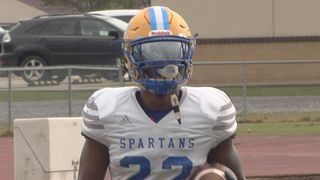 GONZALES - East Ascension running back Walter Samuel is a dynamic football player on the field, rushing for 614 yards and seven scores so far this year. But off the field, he is quiet and preserved and likes to lead by example.

"I don't like to talk a lot. I like to just stay to myself. I like to stay focused. I feel like when I talk to people, it takes me off track," said Fans' Choice Player of the Week winner Walter Samuel.

"When he scores, he will jog off. You won't see this big celebration. Normally, if you get a kid that don't talk much in public, when he gets around his friends you'll see a different guy. But that's just who he is, you know, he's kind of like that. He's a solid guy who leads by example," East Ascension head coach Darnell Lee.

Samuel tries to emulate his game around his favorite player, Saints running back Alvin Kamara. The back studies everything he does and even tried to change his number to 41.

"We already have one Kamara. I think Walter Samuel needs to be Walter Samuel," said Lee about when Samuel asked to get his number changed from 22 to 41.

"He has a lot of balance. I think I have a lot of balance too. When I watch him on TV it looks it he's going slow. But coach told me he goes fast and I need to go fast too. So when I see a hole, I hit it hard," Samuel said.

"That's his favorite player, and I can definitely see where he respects his game," Lee said.

Like Kamara, Samuel is an all-around back. He currently leads the Spartans in rushing, and he's second in the team in receiving.

To win the Fans' Choice Player of the Week, Walter had 170 yards on 11 attempts and 4 touchdowns against rival Dutchtown.