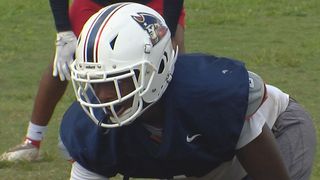 BATON ROUGE - For the first time this season, a defensive player has won The Fans' Choice Player of the Week.

Lester was not always a defensive standout—he was a quarterback. Jones made the transition to defensive end after his freshman season and being the team player that he is, he didn't complain. He made the most of his opportunity.

"It was so surprising for me. I came in for summer workouts, he told me. I'm gonna help the team," Jones said.

"He was just too talented of a player for us to have as a backup. We had had to find some type of way to get him on the football field. So we tried him out of defensive end, and I mean, he's just taking off with it. He's really, really worked hard to perfect his craft, " Liberty head coach Drey Trosclairi said.

Lester is used to overcoming adversity. His father passed away when he was in middle school. But he's always had his mom, Debbie, who has motivated him to be better.

"Without her, I wouldn't be where I am right now. And she pushes me. She makes me do what I do," Jones said.

Jones has been so successful also because he's an extremely hard worker. He works out twice a day—once with the football team and once with the powerlifting team, to help them get stronger and better.