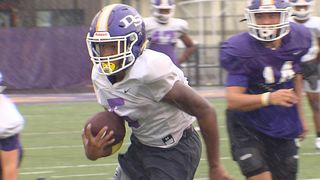 This past Friday night, Denham Springs was without their starting quarterback, and that's typically a cause for concern but not when you have Ray Ray McNealy.

The running back ran all over Franklinton rushing for 222 yards and two scores.

"It was very intense," said Denham Springs running back Raydrian McKneely. "We started the game off fast with the run game. We pounded ball."

"He put the team on his back," said Head Coach Brett Beard. "Every opportunity he makes the most of it. Ray shows up every day and does the work and competes. He's a phenomenal leader. He's a big presence in our locker room. The kid comes to work every day, gets after it, wants to be the best, competes that way every day. As a coach, you want kids to make plays when they have to make plays, and he's a guy we can give it to and we trust."

McKneely is a part of a junior class at Denham Springs that is known for its speed. So much so they're called the Legion of Zoom.

"They've had a ton of success, you know, through junior high and early in their high school career, because of that ability to run. I guess the Legion of Zoom is something that is, I guess, blown up," said Beard.

The Junior currently has 6 division 1 offers.