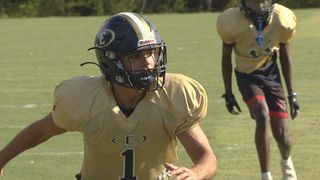 The captain ran all over Country Day last week, rushing for 211 yards and three scores, but this is not a surprise for someone who works so hard, both on the field and off.

"He's not the biggest guy out there, but just a hard worker who would do anything for the team, would do anything that the coaches asked for him, and he always gives 100%. Definitely, a guy that you want to represent your team on Friday night," Episcopal Head Coach Travis Bourgeois said.

"I definitely had some confidence going into week two because the game before that, I had three touchdowns. So I just wanted to go from there. I'm definitely physical. Whenever I see a guy in the hole, I'm going to meet him there," Episcopal running back Ethan Carmouche said.

Starting at linebacker last year, Carmouche made the transition of running back. Now, as a senior, he's leading on both sides of the field.

"He always has a smile on his face. As a team captain for us, he brings a lot of leadership skills, not a big vocal guy, but he leads by example. Every rep at practice, he gives 100% and just showing the younger kids and trying to lead the way," Bourgeois said.

"That's where it all starts because once you're a leader, you can show everybody what you're made out of," Carmouche said.

Carmouche is interested in playing college football, and he believes it's going to be on the defensive side at linebacker. Off the field, the senior also has plans on going to law school.