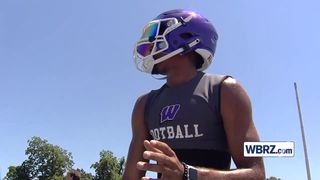 Woodlawn had a super productive season in 2020, winning half of their games. Problem is they played just four. But former LSU quarterback Marcus Randall knows that if there was ever a time to have a fantastic year, it's this year. Nine returners on offense and five on defense with one of those nine being highly touted quarterback Rickie Collins.

All of Woodlawn's skill guys return including all three running backs. Marcus Randall has 110 players on the roster which is the biggest team he's had since being at Woodlawn.