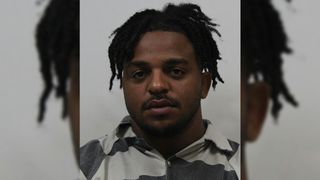 NAPOLEONVILLE - A man was arrested after he allegedly threw a can at a deputy's forehead and doused other deputies with beer.

Ashton Trevon Johnston, 23, was arrested Saturday morning at the Napoleonville Community Center after the sheriff's office was called to disperse a large crowd.

Authorities said they intervened when two people got into a fight.

During the confrontation, the arrest report said Johnston "very aggressively" threw an open beer can that struck a deputy in the forehead and sprayed beer on other deputies.

Johnston allegedly resisted arrest when authorities tried to take him into custody.

Johnston was booked into the Assumption Parish Detention Center on charges of:
*Resisting Arrest by Force or Violence (2 Counts)
*Battery Upon a Police Officer
*Disturbing the Peace – Appearing in Public in an Intoxicated Condition