Boy, 7, found dead after group of tubers went over dam in North Carolina 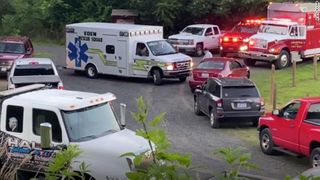 EDEN, N.C. - A 7-year-old boy was found dead in a North Carolina river days after a group of tubers went over a dam.

The body was retrieved Sunday from the Dan River near Draper Landing in Eden after a 911 call alerted emergency responders, CNN reported.

The child was one of nine tubers who went over the dam near a Duke Energy power plant on Wednesday evening. Four tubers from the group were found alive Thursday after a power plant worker saw something and alerted 911, Officer Lt. Kevin Suthard of Rockingham County Sheriff's Office Public Information said.

Three other tubers' bodies were recovered Thursday. One tuber is still missing.

Another search was conducted Sunday between the dam and where the boy's body was found, but emergency officials still have not found the final victim.

Rockingham County officials believe it is "very unlikely" for victims to surface due to the release of water from Belews Lake Saturday night increasing river flow.