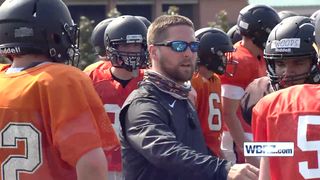 After long time coach Gabe Fertitta left for a job at the collegiate level, the keys to the Catholic program were handed over to former Catholic PC David Simoneaux and what a treasure trove he inherits.

The defending Division I state champs have five star offensive tackle and LSU target Emery Jones and the number three ranked wide receiver in the 2023 class in Shelton Sampson. All centered around sophomore quarterback Daniel Beale who started the second half of last year as a freshman.