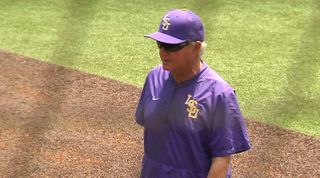 Tennessee improved to 50-16 with its fifth straight NCAA Tournament win. LSU completed its season with a 38-25 record.

Sunday's game marked the end of the career of LSU coach Paul Mainieri, who announced on May 28 that he would retire at the end of the Tigers' 2021 season.

Mainieri completed his career No. 7 among NCAA Baseball Division I coaches in wins, and he is one of only five coaches in NCAA Division I Baseball history to earn 1,500 victories and a national championship.

Tennessee right-hander Blade Tidwell (10-3) earned the win Sunday, as he worked seven innings and allowed six runs on seven hits with no walks and seven strikeouts.

LSU starter Landon Marceaux (7-7) was charged with the loss as he gave up three runs – two earned – on three hits in three innings with one walk and four strikeouts.

"We felt good going into the game," Mainieri said. "Landon has so much courage and guts, and he was unbelievable in pitching twice in the regional last weekend, but I could tell early on he didn't have his usual stuff. His slider didn't have the kind of bite that it normally does and his velocity was down. It just shows you what kind of competitor he is, he gritted his teeth and battled through three innings."

Tennessee, the visiting team for Sunday's game, grabbed a 2-0 lead in the top of the first inning when third baseman Jake Rucker unloaded a two-run homer, his eighth dinger of the season.

LSU responded in the bottom of the first with a run as rightfielder Dylan Crews led off the frame with a homer, his 17th of the season.

Rucker hit a solo homer with one out in the third to extend UT's lead to 3-1, but Crews again responded with a two-out solo homer in the bottom of the inning to narrow the gap to 3-2.

Tennessee catcher Connor Pavolony blasted a two-run homer in the fourth against reliever Garrett Edwards, giving the Vols a 5-2 advantage.

The Vols erupted for six runs in the fifth in a rally that was highlighted by rightfielder Jordan Beck's three-run homer.

LSU reduced the deficit to 11-4 in the sixth on a two-run homer by first baseman Tre' Morgan, and the Tigers trailed 11-6 when designated hitter Brody Drost launched a two-run homer in the seventh.

However, Tennessee leftfielder Evan Russell hit a two-run homer in the eighth, and the Vols added two runs in the ninth to account for the final margin.

"Our kids battled like crazy all year," Mainieri said. "We were counted out a lot of times during the course of this year, and our guys never gave up. They're a resilient bunch, and I love them. I'll always remember them, they're my last team.

"I don't want people to be sad for me, I'm the luckiest guy in the world. Thirty-nine years of being able to live out a childhood dream of being a college baseball coach. I got to do what I wanted to do with my life, who could ask for more?"