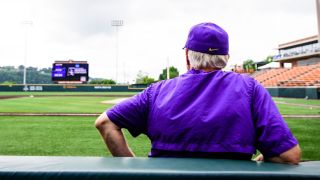 KNOXVILLE, Tenn. - Tennessee scratched across three runs in the bottom of the 6th, and starter Chad Dallas struck out 12 to lift the Volunteers to a 4-2 victory in game one of the Knoxville Super Regional in Lindsey Nelson Stadium.

Dallas kept the Tiger hitters off balance in his six-inning outing, picking up his 11th win of the year while giving up two runs on five hits. Tennessee closer Sean Hunley relieved Dallas in the top of the 7th and tallied four strikeouts without giving up a run on three hits.

LSU went with senior right-hander Ma'Khail Hilliard, who gave the Tigers a great effort, firing five innings, while allowing only one run on three hits and striking out six Volunteers. Freshman reliever Javen Coleman (3-2) was charged with the loss after taking over for Hilliard in the 6th and allowing three runs on three hits.

The Tigers will return to action Sunday afternoon to take on the Volunteers in game two of the super regional. The matchup will be televised on ESPN2, and it will be broadcasted on the LSU Sports Radio Network affiliates including 98.1 FM.