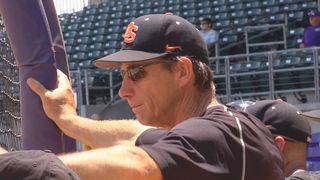 The rumor mill started spinning furiously on Wednesday night when rumors of a potential front-runner to replace Paul Mainieri atop the LSU Tiger baseball program surfaced.

Kendall Rogers from D1baseball.com tweeted out that LSU was interested in former Oregon State head coach Pat Casey and that more details could come soon.

Casey is a three time national championship coach winning the College World Series in 2007, 2008 and 2018 with the Beavers.

An unnamed source at LSU confirmed with WBRZ that Casey met with athletic officials last week in Baton Rouge.

Casey retired from the Beaver program in 2018 and continues to work in the athletic program where he makes over $600,000 in an advisor role at Oregon St.

LSU will likely make no official moves until after the LSU season concludes as to not take any of the attention from the current Tiger baseball team.

COACHING SCOOP: Multiple sources have informed @d1baseball that former @BeaverBaseball legendary coach Pat Casey has emerged as the leading candidate for the @LSUbaseball head coaching job. More could be coming on this very soon. #GeauxTigers #LSU