LSU battles back to beat Oregon in Regional final 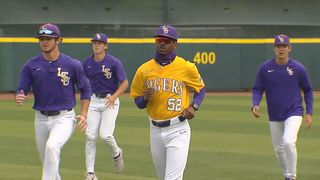 The LSU Tiger baseball team didn't make it easy on themselves in their Regional final against homestanding Oregon, but the finish was exactly what they wanted for the elimination game of the Eugene regional on Monday night.

The LSU Tigers rallied with three runs in the eighth inning to take the lead back from Oregon and win it 9-8 for their first road regional win since 1989.

LSU will now travel to face the Tennessee Volunteers in the NCAA Super Regional in Knoxville at the end of the week.

LSU starting pitcher Ma'Khail Hilliard fired a hitless first inning and the Tiger bats responded with a big Gavin Dugas two-run home run in the bottom of the first.

Unfortunately that was short lived as freshman pitcher Ty Floyd replaced Hilliard in the second and the Oregon Ducks quickly started hitting him, scoring two runs in the second.

Michael Fowler replaced Floyd in the third, but the results were the same as the Ducks touched up Fowler for a home run as well.

Dugas would help LSU respond with a solo shot to start the bottom of the fourth, but the Ducks were leading 5-3 nearing the mid-way point of the game.

LSU would add another run on a passed-ball and then in the sixth inning Drew Bianco blasted a two run shot to left-center to put the Tigers back in front 6-5 heading to the seventh.

Garrett Edwards would get touched up by Kenton Tovan for a two-run homer in the seventh inning as the Ducks would regain the lead 7-6.

However in the eighth inning the Tigers would tie the game when the Ducks pitcher balked in a Cade Doughty from third for the run.

Jordan Thompson would single to center to score Will Safford and make it a 9-7 game.  The Ducks would add a run in the 9th, but Landon Marceaux would get a fly out to right to finish the game off.