Southern eliminated from Austin regional after loss to Fairfield 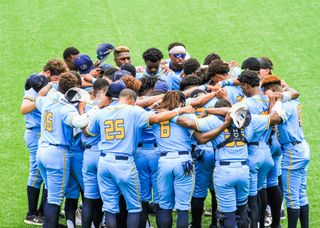 AUSTIN, Texas – The 2021 Fairfield University Baseball team will forever live on in the record books. The Stags kept their historical season alive as they defeated Southern University 6-2 for the program's first-ever win in the NCAA Regionals. Jake Noviello was credited with the historical win as he tossed five innings, earning his ninth victory of the season which also broke the program's single season wins record.

"I don't think we showed up to this tournament just to get our first Regional win," acting Head Coach Brian Fay said. "We came here to try and win a regional and that's definitely what we're still trying to do. I think the guys are excited and they're understanding of the moment but at the same time we expect to be here and we know we belong here."

"It's great," Jake Noviello said. "Coming here out of high school you want to come into a winning program and that was something that was here. This was the next step for us. We have a great team this year with great camaraderie and great fight and I couldn't be happier to be a part of this team."

Fay was the acting head coach today as Fairfield's head coach Bill Currier was attending his son's wedding in Vermont. Currier will be back tomorrow for Fairfield's next game.

After nearly a three hour lightning delay, the Stags were immediately put into pressure as Southern tallied three hits and a hit batter in the first inning. Tremaine Spears got the big hit for the Jaguars with a RBI bloop single into right field for the games first run. The Jaguars would load the bases but Noviello would get a ground ball to third to end the threat.

The Stags would find their offensive footing in the bottom of the second. Charlie Pagliarini started the rally with a one-out walk and was followed with a Mike Becchetti double down the left field line. Matt Venuto brought both runners home with a RBI single to give the Stags a lead they would not relinquish.

Fairfield would add to the lead with three runs in the fourth. Dan Ryan drove in the first of those runs with a RBI single to left and Sean Cullen added a pair with a RBI single up the middle to put the score at 5-1.

Noviello would keep that advantage as he completed five innings. The right hander would strikeout three and allow just the first inning run in picking up his record setting ninth victory of the season.

Noviello was relieved by John Signore who threw two scoreless innings, needing just 13 pitches to get through those frames. Jason Hebner would add a hitless eighth, to bring his season total to 8.1 innings without allowing a hit. Nick Grabek would close the door on the historical win allowing only an unearned run.

The Stags would cap their scoring in the sixth after Justin Guerrera stole second base, allowing Mike Handal to create a run by sprinting home and forcing a muffed throw.

Cullen and Venuto were the two Stags to record multiple hits with Cullen reaching base three times.
Fairfield will survive and advance for another day and will meet the winner of the Texas and Arizona State matchup later on tonight. The Stags, along with Head Coach Bill Currier, will look for a spot in the Regional Final when they take the field on Saturday at 2pm EST (1pm CST).