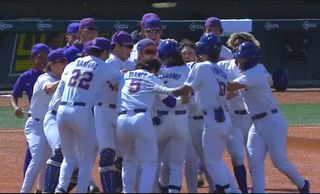 EUGENE, Oregon - The LSU Tiger baseball team stayed alive in their their NCAA Regional elimination game as they walked off Central Connecticut on Saturday in Eugene as Giovanni DiGiacomo came up with his first hit at the most important time.

DiGiacomo stepped to the plate with the bases loaded in the 10th inning and got a shot through the right side to score the winning run in 6-5 victory.

The Tigers stay alive and advance on in the regional as LSU will face the loser of Gonzaga and host team Oregon on Sunday with a 5 p.m. first pitch scheduled.

LSU started their game in perfect fashion as Dylan Crews hit his first of two home runs in the game to get the Tiger scoring started.

However the Blue Devils responded with a big five-run second inning.

LSU would respond as well in the third inning as Crews once again got the scoring started with his second of two home runs.  LSU would plate three runs to tie the game in the third, but the game would then play out scoreless for the next six innings.

LSU got great relief pitching from both Parker Edwards and Devin Fontenot who both combined to spin six innings of work allowing just two hits and no runs while striking out six.