Official start of hurricane season could move up to May 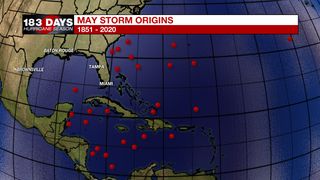 The National Oceanic and Atmospheric Administration, which tracks major storms year-round, is considering moving up the official start date of hurricane season by about two weeks.

The Washington Post reports a group at the National Hurricane Center in Miami, which is part of the NOAA, is deciding whether the start of the Atlantic hurricane season should move to May 15 from the widely agreed-upon start date of June 1. The discussion was prompted by a growing trend for storms to form ahead of June.

According to NOAA's historical hurricane tracker, 34 storms have formed during the month of May since 1851. In 2020, both Arthur and Bertha developed prior to June 1. Though most systems are weak at that time in the season, the strongest on record was a category two hurricane, later named Amanda, that struck Florida in 1863.

The National Hurricane Center has announced plans to start issuing tropical weather outlooks on May 15. Additionally, the Pacific hurricane season already begins on May 15.