Overpayment notice sent in error, woman does not owe $15,000 after all 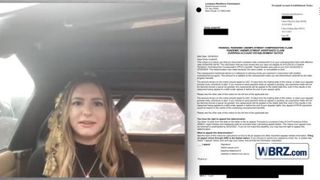 BATON ROUGE - There's a new concern for people on unemployment in Louisiana. A $15,000 repayment bill sent in error to someone who's been out of work because of the pandemic. It comes as hundreds still complain to 2 On Your Side about their troubles with the Louisiana Workforce Commission.

Emily Underhill says she got the paperwork on Monday and it said she owed about $15,000 back to LWC.

"I've heard a lot of stories nationwide about people everywhere who are getting these letters all of the sudden letting them know they owe thousands of dollars back in unemployment," said Underhill.

She says she received four overpayment notices, one of them says she owes $10,200 in Federal Unemployment Compensation Benefits because they were awarded in error. The paperwork says she has 15 days to pay it all back or appeal.

The documents are daunting to Underhill, who was laid off in March 2020 from the luxury cruise ship industry. She's been using those unemployment benefits to pay her bills.

In September 2020, 2 On Your Side reported that about 7,600 overpayment notices were generated in error and mailed out to people receiving benefits. Then, it apologized for the mistake.

Monday, Underhill says she spent more than an hour on the phone trying to get answers. Once she was transferred to the correct department she was hung up on.

Tuesday afternoon, Emily said she was connected to someone at LWC who informed her that the overpayment documents were sent in error. Underhill said the documents were sent due to some missing and/or incorrect information in the system which caused it to send out those notices. She's happy it's been sorted out and has since received adjusted notices that reduced her overpayment balances to zero.

LWC hasn't said how wide-spread this issue is.