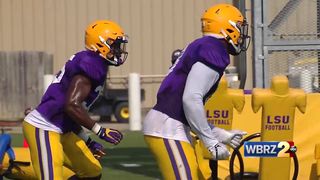 Ed Orgeron said after Saturday's scrimmage that he has a pretty good idea who his starters will be for next week's season opener against Georgia Southern. One position he wasn't talking about was middle linebacker. It's a three person race between Damone Clark, Jacob Phillips and Patrick Queen.

"I feel good about all three," said outside linebacker K'Lavon Chaisson.

He feels that even though the team is less than two weeks away from their season opener and still have no starter means that the race is too close to call and that all three are viable candidates.