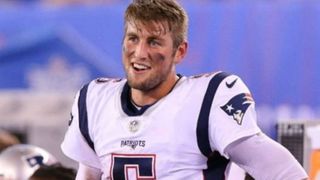 ATLANTA, GA - One day after being released by the Patriots, former LSU quarterback turned NFL wideout Danny Etling was claimed off waivers Wednesday by the Atlanta Falcons.

The experiment to make Etling an NFL wide receiver did not go as planned in Foxborough. New England drafted Etling, 25, in the 7th round of last year's draft only to have him on the team's practice squad. This preseason he made the switch to receiver and had been working at the new position all throughout training camp.

We have claimed QB Danny Etling off of waivers from New England. https://t.co/hvRhyuo1eB

Atlanta was down a quarterback after third string signal caller Kurt Benkert was placed on injured reserve following the preseason opener against the Denver Broncos. Although the team signed Matt Simms to handle the third team snaps previously held by Benkert, Etling will look to provide another option at quarterback.

During his junior and senior seasons at LSU, Etling threw for a combined 4,586 yards with 27 touchdowns and seven interceptions. He joins a Falcons roster that already has a number of former Tigers on it, including Deion Jones, Duke Riley and Russell Gage.