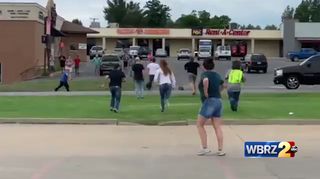 TAHLEQUAH, OK - A group of Louisiana natives running a Cajun-themed eatery in Oklahoma took part in an unusual rescue after an unknown hog showed up at their doorstep.

Mike Linney, co-owner of Linney Breaux's in Tahlequah, says the fiasco started with a bizarre coincidence.

“Oddly enough it was the same day we were introducing our new pork belly poboy, and we started thinking, 'Is this some kind of sign or joke?'” Linney said.

Things took a turn when staff at the restaurant tried to corral the pig, which they believed to be someone's pet. Soon the animal ended up in a neighboring parking lot, and Linney found himself recording his workers and some other passersby trying to keep the pig from wandering into traffic.

"This is insane, the whole town is chasin' Marshall!" said Linney, trying to contain his laughter.

The slippery swine was eventually herded into another nearby parking lot where his pursuers lost sight of him.

'Marshall', as he's come to be known, was eventually captured unharmed by someone in a nearby neighborhood. His captor has since gotten in touch with the owner through Linney's restaurant.