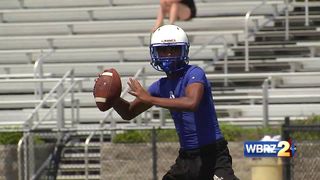 BATON ROUGE-  Coming off of off a 3-8 season, head coach Don Gibson and the Port Allen Pelicans feel confident that this season will be a turning point for the program.

Running back Edward Wilson will be the focal point of the offense at running back, while also playing safety on the defensive side of the ball. Wilson is being recruited by schools like Southeastern and Nicholls State.

At quarterback, Jeremiah Dehon will be under center for the second straight season after winning the job as a freshman in 2018.

"We were an extremely young football team last year and I say that because it was an understatement. We played a lot of young guys last year. When you watch us this year, you see growth," said coach Gibson. "You see a lot of guys understanding the philosophy and the concept. Understanding what we want to do from a offensive and defensive philosophy and that is important. That's why you see guys flying around a little more and look more comfortable with what they're doing with their alignment and assignment."

Those 9 returning starters on defense have a better grasp of their concepts and assignments than they did last season. Sophomore Jordan Antoine will run the defense as a starting linebacker. Safety Mekyle Franklin comes into this season with 5 interceptions and will work closely with Jacoby Howard to lock down the secondary in 2019.